Apple has promised to announce the first news of iOS 9 beta 1 during their Apple World Wide Developers Conference, WWDC 2015. Predictions are prospered.  Finally Apple launched first beta of iOS 9 on 8th of June for all Apple fellows which are staying with lots of hopes to download iOS 9. Apple’s new iOS 9 beta version platforms for iPhone, iPad and iPod touch with wide range of improvements and changes. We expect iOS 9 few beta versions during Apple’s testing period before confirm iOS 9 major version. iOS 9 is then next generation major mobile operating system and it will be the Apple’s iOS turning point. Its first step is kept on yesterday in San Francisco. 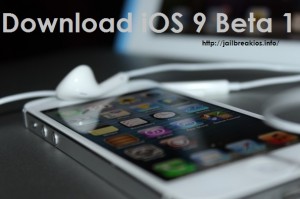 Before you start to install iOS 9 beta 1 on your iDevice don’t forget to do full device backup using iCloud or iTunes .

Step 2 : Now you will need o register your UDID. Plug your iDevice into iTunes to find the UDID of your idevice. Select iTunes and then tap on the serial number for show the UDID. Now copy this number. [ Windows – Ctrl + c / Mac – Command + C ]

Step 3 : Click “ Certificates, Identifiers & Profiles” from Member Center Page. Tap on “Devices” from iOS Apps and here click on “+” to do registration of UDID.

Step 4 : Navigate to SDK > iOS > iOS 9 beta 1 and then tap on “Download”. Select your device from menu to continue downloading.

Step 6 : Now install it on your idevice.