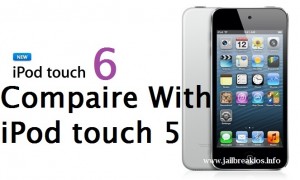 The new iPod touch 6 brought the 8 megapixel improved camera that help to take better videos and photos. It also allows to record videos as slow motion. However Morrison has begun his video to showing similarity between iPod touch 5 and 6. They indicated Geekbench scores for both devices and he told that iPod touch 6 crushes the iPod touch 5. As we mentioned that taiG jailbreak has announced iOS 8.4 jailbreak ability. So besides of the Apple’s features, users can take new cydia tweaks, apps, modes, themes and more on the new iPod with TaiG jailbreak.

6th generation iPod touch came out with faster Wi-Fi speed ability. New 64 bit A8 processor and 1GB of RAM included in new iPod.  However, now you can see the demonstration of the iPod touch 6 below uploaded by Jonathan Morrison of TLD.

Download TaiG jailbreak 2.4.3 latest version on your computer, connect your iPod touch 6 to computer and run the tool as an administrator. Uncheck 3k assistant option and click start. Wait until reboot your iPod and cydia will appear on iPod touch home screen.