iOS 8.4.1 just has out of beta stage into the public. Behind the six weeks of iOS 8.4 releasing with new Apple Music and one month after of first iOS 8.4.1 beta released, Apple has confirmed the official iOS 8.4.1 for all iPhone, iPad or iPod touch users. The public version of iOS 8.4.1 came out under the 12H321 build number. Download iOS 8.4.1 through the Over-the-air under the Software Update option in the settings app.

On July 14th Apple could release the first beta stage of iOS 8.4.1 to all registered developers of the Apple developer program. iOS 8.4.1 is the first major update behind the iOS 8.4 which introduced new music app that integrated with Apple music. iOS 8.4.1 public update has come out with some bug fixes and various performance improvements. 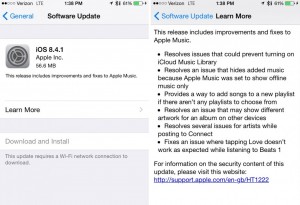 Some web sites said that iOS 8.4.1 is a minor update that included new features, bug fixes, improvements and security updates fewer. However, you can determine that it is the minor or major update. Through the iOS 8.4.1 testing period we could not discovered outward-facing changes in the beta. However Apple has specially mentioned about only Music changes like fixes and improvements. Here is the list of bugs that have fixed in iOS 8.4.1 public :

iOS 8.4.1 is compatible all iPhone, iPad or iPod touch. If you are not getting the new update via OTA then you can download iOS 8.4.1 on your idevice using iTunes. Check your idevice back cover for take model number to download the appropriate update. Here is the  list of iOS 8.4.1 device compatibility :

Apple has patched several vulnerabilities used by TaiG jailbreak for iOS 8.4 – iOS 8.1.3. They could kill all taig jailbreak possibilities in iOS 8.4.1.