Apple has just released the fifth beta stage of iOS 9 in 13A4325c build number for all registered developers of Apple’s developer program. It can be downloading on iPhone, iPad or iPod touch. iOS 9 beta 5 downloading path given in below. The latest fifth beta of iOS 9 came out just over a fortnight behind the fourth beta. Do you remember that iOS 9 beta 4 has introduced Home sharing for Apple Music. Apple has re-introduced Home Sharing for Apple Music in the new beta and they added the Handoff option within the App Switcher.

Note – Apple is scheduling to release the final version of iOS 9 at the iPhone on next month. So ready to download iOS 9 so soon. 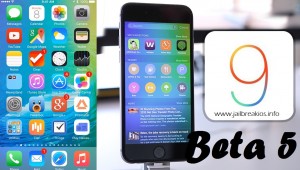 Here is the iOS 9 device compatibility :

The latest beta of iOS 9 is currently available to download for all registered developers of Apple developer program. A public beta release will be later this month. iOS 9 beta 5 can install all iPhone, iPad or iPod touch. If you think to download iOS 9 beta 5, then you should be the member of the Apple Dev Center. Then downloading entrance will open by ADC to take new beta of iOS 9. The latest beta of iOS 9 is available as an OTA also. So who have already installed any iOS 9 beta, you can install iOS 9 beta 5 via OTA. It also available in ADC website for users who prefer installing it manually.

Apple has just released third beta of iOS 9 as the public for users who has enrolled in Apple’s public beta program. iOS 9 public beta 3 and iOS 9 beta 5 has carried the same build number 13A4325c. It means that both releases are identical but those have pushed through different channel.  If you are already install previous public beta of iOS 9, then you can update the latest on using OTA. Settings > General > Software Update.

Nowadays Apple’s iOS 9 beta collection is releasing one by one. I know now cydia lovers waiting to iOS 9 jailbreak with latest cydia tweaks, apps, themes and more. TaiG jailbreak has hinted that iOS 9 jailbreak tool releases by them. However, as rumours Apple is trying to release iOS 9 final version on next moth with iPhone 7. I think immediately we we can see the iOS 9 jailbreak tool. So ready to accept it.