Apple’s iOS 8.3 successfully rolled out among billions of Apple fans as non-jailbroken iOS software update. There is currently not available iOS 8.3 jailbreak possible announced by any jailbreak hacker or group. Although now a days, experiments are going on for iOS 8.3 cydia. In same raw Apple has confirm the newest iOS 8.4 beta 1, beta 2 in testing period  before release iOS 8.4 as major version. The famous hacker of Stefan Essar released iOS 8.4 beta 1 jailbreak possibility via YouTube. In fact we can hope that iOS 8.3 also can jailbreak for download cydia on iPhone, iPad and iPod touch which is running on iOS 8.3. 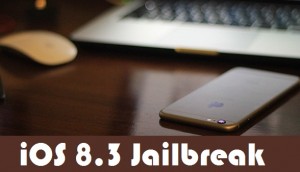 Apple has fixed some bugs in pre beta versions and introduced new user features like redesigned Emoji keyboard, CarPlay Wirless and Siri language via iOS 8.3. TaiG jailbreak, evasion, PP jailbreak and Pangu jailbreak do not work for iOS 8.3 jailbreak, because Apple has patched list of vulnerabilities in iOS 8.3. According to the state, iOn1c’s video is the one of the prediction about iOS 8.3 jailbreak which is available presently.

All fellows, if you currently use idevice witch is running on iOS 8.1.2 or lower, should not upgrade your device into iOS 8.3, because iOS 8.3 jailbreak tool still could not find. In fact, until confirm jailbreak possibility you should stay out upgrading. You will loss in jailbreak with cydia when you ignore our statement.

Users who are installed iOS 8.3 currently, you must wait for release iOS 8.3 jailbreak tool. All fellows can download iOS 8.3 and update software via online or OTA, but OTA updates are will not work with iOS 8.3 jailbreak in future.

You should stay until iOS 8.3 jailbreak tool release officially.