6th generation iPod touch’s features almost same as iPhone 6. A8 CPU, iGB RAM, 8 megapixel camera and iPod touch 6 powered by Apple’s A8 chip. And especially it is running on iOS 8.4 Apple’ current mobile operating system. Therefore it is no surprise that Taig jailbreak and PP jailbreak work on it. To jailbreak your iPod touch 5 follow our tutorial. You can gain taig download or PP jailbreak as your choice for your desktop or mac OS. 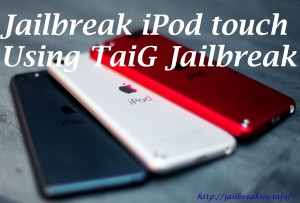 The new iPod touch ships with iOS 8.4 out of the box, it is still recommended a fresh iOS 8.4 restore before start the jailbreak. Use iTunes to do device restore.

Note – Don’t forget to take device backup you may have on the iOS device earlier restore or jailbreak. Use iTunes or iCloud to do device backup. 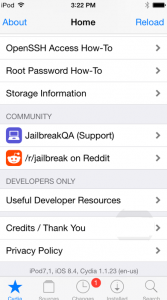 Make sure if you disabled “Find my iPhone”, “Passcode or Touch ID” and all anti-virus softwares. Enable Airplane mode before jailbreaking.

Especially you must charge your idevice battery. Full battery will help to continue the process properly without battery drain.

Step 3 – TaiG tool downloaded as .zip file. You must unzip it and extract it on your PC’s desktop using as an administrator.

Step 4 – Your device will identify by TaiG within few minutes.

Step 6 – Your device will reboot itself after complete the process running. Then you can see the cydia icon on your idevice home screen.

If you don’t have a windows OS PC , then you can run PP jailbreak tool using virtual PC. Either jailbreak tools works fine with iPod touch 6.