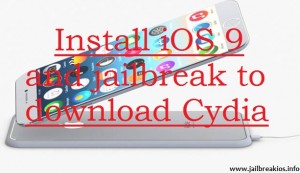 Apple has introduced the major version of iOS 9 as a version with full enhancements as you we expected always. And new multitasking features added for iPads to use with. And not that only, following list too will help you to get to know more about new on iOS 9.

And it has included some other new activities as well. If you are willingly to know about iOS 9, we suggest you to upgrade the public beta version before you reach the major version. You don’t need to doubt about downgrading. Because still you are able to downgrade your iOS 9 device to iOS 8.4 and iOS 8.4.1. But if you need to use a jailbroken device of iOS 9 it is better to stay away from that until we get a jailbreak tool.

By the way even still we doesn’t have any sign of a jailbreak tool for iOS 8.4.1, Taig and Keen team too have proclaimed to release a tool for iOS 9. Therefore hope the relese of iOS 9 will eager them to jailbreak both iOS versions soon. But maybe we will be able to make iOS 8.4.1, a jailbroken version before iOS 9 launch.

According to rumors, mostly Taig will be the victor at this time too. Because they were the first, to jailbreak iOS 8.3 and iOS 8.4 as well. If it will be we will receive the Windows jailbreak tool and Mac tool too at the same time. And will be able to download Cydia on our devices and make iOS 9 advance than it is.

Anyhow as Apple’s plan to make you not to jailbreak your device may be users will ignore the jailbreak tool because this release will be the most user friendly operating system ever. But to get all news accurately we must wait for Apple and jailbreak community announcements. Here are the device of iOS 9 make sure your device is one of these. And also the future iPhone 7 too will be here after the release.