TheCouple of week back of release iOS 8.4 beta 1, Apple has released iOS 8.4 beta 2 for all iPhone, iPad and iPod touch. All registered developers in Apple Developer program can download iOS 8.4 beta 1 and beta 2 otherwise through OTA also can update the latest iOS beta version. iOS 8.3 and iOS 8.2 also successfully rolled out by Apple in nearly day. We are expected iOS 8.2 jailbreak tool will find by TaiG, because TaiG was the first jailbreak team who is released first jailbreak news about iOS 8.2 jailbreak. But still they could not possible to jailbreak iOS 8.2. 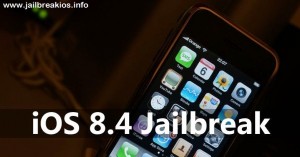 After iOS 8.4 beta 1, second beta of iOS 8.4 has released with revamped music app. Including mini player and many more newest features introduced with improved Music app. According to Apple security report we seem that they try to patched up all jailbroken bugs in previous versions. I think that their effort is succeeded, because I said that, iOS 8.2 non-jailbreak, iOS 8.3 non- jailbreak yet.

I am not showing persistence or an untether at the moment because something is broken with it. But hey this is just a first proof of concept.

I will keep you posted with updates.

Apple has fixed the MobileStorageMount in iOS 8.2, and in iOS 8.3 Apple has fixed total of 39 security flaws which are jailbroken by TaiG team. Therefore I think that previous TaiG, Pangu, evasi0n or PP jailbreak tool not suitable for iOS 8.2 jailbreak and iOS 8.3 jailbreak. We will back with iOS 8.4 jailbreak official news.