Nowadays all cydia lovers are busy to find out iOS 8.3 jailbreak possibilities. Until to confirm the ability of install cydia on iOS 8.3, users are waiting in agog. Meanwhile some users are trying to downgrade iOS 8.3 to iOS 8.2. Apple has released iOS 8.3 firmware to download on April this year. Since April more than two months, cydia lovers could not possible to install cydia on iOS 8.3. Because of that reason they allured to downgrade iOS 8.3. They stay out iOS 8.3 and trying to reach iOS 8.2, but do not forget iOS 8.2 also available as unbroken iOS. It means you cannot take cydia on iOS 8.2 still.

In nearly day Mobile Security Conference 2015 held in Shanghai. In this conference the team of Pangu revealed the important secret as iOS 8.3 jailbreak. They gave big hope on all cydia cydia lovers hearts with their statements. Pangu confirmed iOS 8.3 jailbreak on July. They said that Pangu iOS 8.3 jailbreak tool will release on July 2015. 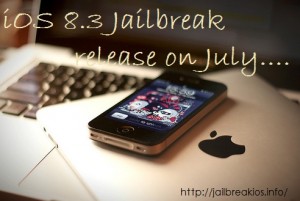 Pangu is the advanced jailbreak tool according to the jailbreak history. iOS 8 jailbroken prestige appropriated by Pangu team. It is the best untethered jailbreak tool and millions of Pangu fans attested to their success. Pangu brand name is famous day by day with their jailbreak technique. Simple, untethered and transparent. Pangu jailbreak compatible device list given in below,

As we mentioned iOS 8.2 is currently stage on as non-jailbroken iOS. Therefore users cannot install cydia on iOS 8.2. After consider that all reasons, we advise you to avoid iOS 8.3 downgrade until on July, because iOS 8.3 downgrade no longer possible. Pangu confirmed that they are going to release the tool to jailbreak iOS 8.3. So don’t haste to downgrade iOS 8.3. Apple facilitated to download iOS 8.3 on iTunes or OTA with plenty of features and bug fixes.