However, all cydia lovers are expecting to download new cydia tweaks for their device modification. So if you are already jailbroken your iPod touch 6, then TaiG jailbreak has introduced number of latest cydia tweaks for you. Follow us to choose your favorite tweaks. 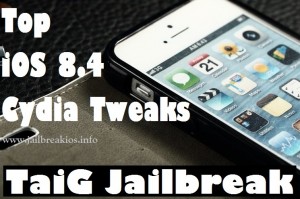 BetterFourByFourFolders – The tweak allows you to include 46 apps in a single folder.

AquaBoard – You can add water effects to home screen of the iPhone or if you like to add those effects to lock screen, it also easy to do with this tweak.

GroovyLock – You can add widgets to the lock screen using the GroovyLock.

Transition – You can add the cool animation for the device unlocking time.

Alkaline – The tweak allows to you to theme battery, data indicator and Wi-Fi. Actually Alkaline is the beta theming tool.

SaveGram – You can save instagram photos to the camera roll using SaveGram.

OneTapClear – You can clear your notification field within single tap.

CallBar – You can stop calls from interrupt you.

LockGlyph – When you lock your phone using touch ID you and add Apple pay’s animation or sound to the iPhone’s lock screen.

Emoji83+ – You can enable hidden emojies and spock emoji on your iPhone.

TaiG team has opened their official page to download TaiG jailbreak tools. So you can download taig v2.4.3 new tool from the TaiG page and click below link to jailbreak your iPhone, iPad or iPod touch using TaiG v2.4.3.