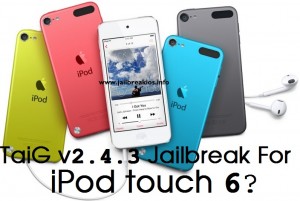 However, now we enter to the iPod touch jailbreak. We know all cydia lovers expect to jailbreak their iDevices and download number of latest cydia tweaks and apps. If you already having the new iPod touch 6, then you can install cydia on it using TaiG v2.4.3 jailbreak tool. Keeping device backup via iTunes or iCloud, you can begin the process.