30th of June in 2015 Apple has introduced iOS 8.4 mobile operating system for iPhone, iPad and iPod touch with much more new features. After few days of releasing, TaiG has successfully jailbroken iOS 8.4 and below firmware like iOS 8.3, iOS 8.2 , iOS 8.1.3. TaiG v2.4.3 which was released to jailbreak iOS 8.4 on windows and TaiG v1.1.0 was released for mac. However, we know that all cydia lovers always expect new cydia tweaks with jailbreak. So now we are going to introduce brand new 20 jailbreak tweaks which are recently released for iOS 8.4. 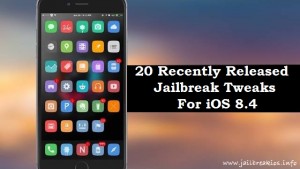 Browsix – Browsix likes a mini web browser that let to search anywhere as your choice. If you need to move the browser, they you can move it around the screen. You can resize it and open it when you tapping on external links in other applications. Browsix comprises to priced tweaks category. But it does not expensive than the $2.99. Browsix is working generally well and it came out with lots of features, options and settings to configure.

HideBadgeText – The tweak removes text from home screen badges and only a red dot will be shown on your device home screen. No any options to configurations.

Floater – This tweak seem like the notification center UI and control center. There are some options available for app icons and other UI elements. The icon will provide you with a cell-shaded look without WinterBoard.

SongCount – Compatible for iOS 8.4. SongCount displays the total amount of all of your favorite songs at the bottom of the My Music tap in the iOS 8.4 music app. The tweak did not tested on iPads. No any options to configure.