I think that you know Apple’s next major mobile operating system of iOS 9 is going to be release on September 2015. We know that nowadays all Apple friends are flying about iOS 9 review and especially they try to find new features of iOS 9. However as Apple’s some status, users can download  iOS 9 on their iPhone, iPad or iPod touch so soon. Among the iOS 9 beta collection, five beta versions are currently available to download for idevices with introducing new features. As I mentioned that all cydia lovers are trying to find the new features of iOS 9 download. So we hope to bring instructions about new features which are expecting on iOS 9. 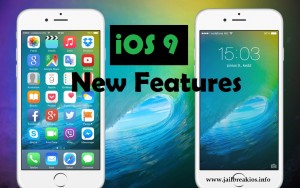 When you connect your iPhone to your car using Bluetooth, iOS 9 operating system make suggestions for your common task while you driving on the way. If you always listen music when you driving your car, playlist or playback controls will de display on the lock screen.

I know all users like to download brand new games on their idevices. They are always hoping to download uncommon amazing games. Apple recollected which games most like to play you like Clash of Clans every morning, provide lock screen notification, replace your apps in multitasking view and more.

I think Apple will not to forget to include Siri on iOS 9. Siri is the useful feature that let to quickly connect for search apps, finding contacts, news on iPhone or iPad. Siri also let to search wide rage topics, understand what are you accurately saying and faster searching.

Do you remember that few months earlier, TaiG’s CEO has posted an announcement that they are going to release iOS 9 jailbreak tool behind the iOS 9 releasing. iOS 9 will be release on September 2015 as Apple’s statements. Apple’s final updated mobile operating system is iOS 8.4 and it also jailbroken by TaiG in nearly day. As some reviewers are saying that sometimes iOS 9 jailbreak tool will be release by TaiG. However I think that you will remember that the main security feature of Rootless witch is hoping on iOS 9. We are seeing that who will be break the Rootless.