Apple has released fourth beta version of iOS 9 in nearly day. It came out in 13A4305g build number and compatible for all iPhone, iPad and iPod touch. We can expect iOS 9 download major update so soon. The team of TaiG are updating TaiG download tool day by day. Apple’s final major mobile operating system of iOS 8.4 has already jailbroken by TaiG. In order iOS 8.1.3, iOS 8.2, iOS 8.3 and finally iOS 8.4 also successfully jailbroken via TaiG jailbreak. I think nowadays TaiG will try to reach iOS 9 jailbreak.

Apple has unveiled iOS 9 keynote on June 8, 2015 during the World Wide Developers Conference. Apple told that they are going to introduce proactive assistant, enhanced multitasking features for iPod, transit directions in maps and lots more new features and improvements via iOS 9. iOS 9 beta 4 is currently available in the member center on the Apple’s developer website to download for all registered developers.  You can download and install iOS 9 beta 4 on, 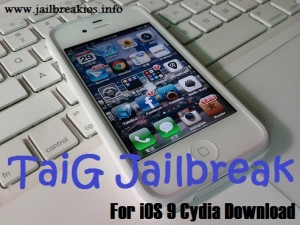 Volume Button Photos – iOS 9 beta 4 bring the ability to snap a photo using the volume buttons on your idevice.

iPod touch support – If you already have the new A8 based iPod touch, then you can upgrade your idevice into iOS 9 beta 4. Apple added a new installation profile with the new beta.

Handoff – Handoff feature has been moved to the bottom of the app switching interface.

Picture in Picture for podcasts – You can watch the video while continuing to complete other works on iPads with the new podcasts app.

Apple Pay – This is the new option including in the settings app and it introduced for apple pay.

TaiG is on the advance stage among the other jailbreak community. In nearly day they could jailbroken iOS 8.1.3, iOS 8.2, iOS 8.3 and iOS 8.4. They optimized the process of jailbreak via TaiG v2.4.3 tool. Still they could not jailbreak iOS 9 any beta version, but sometimes they will release the tool for iOS 9 jailbreak.  You can download TaiG jailbreak tool from the Taig’s page and we expect to download taig tool for iOS 9 cydia download so soon.